The much-dreaded flu season is here, which means it’s time to protect yourself against the virus and common myths that surround it. Every year these misconceptions surface and spread, well, like a virus. Flu myths such as these are equally as harmful as they are false, so don’t let misinformation about the flu and the preventative vaccine blind you from the truth! Instead, turn to the urgent care doctors you trust at American Family Care to debunk these erroneous myths and provide everything you need to know about staying healthy this flu season.

Despite what many say, the flu vaccine cannot give you the flu. It just can’t. The flu vaccine contains an inactive virus, which cannot cause the flu, only a sore arm and occasional mild side effects. The reason that the myth took hold is that it takes two weeks for the vaccine to be able to offer full protection. Those who reported coming down with the flu after receiving the vaccine were likely exposed to the flu virus prior to receiving the vaccine or in the two-week window, it takes your body to develop immune protection. 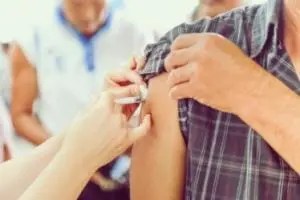 Although the flu mimics some symptoms of a bad cold such as a runny nose, cough, sore throat and sneezing, seasonal influenza is much more serious than a common cold. In the United States, 36,000 people die and more than 200,000 are hospitalized each year due to the deadly flu. Disregarding the flu and treating it as a bad cold is just plain dangerous.

Myth 3: The Flu Vaccine is for Other People

It’s true that people over 65 and those who suffer from chronic diseases are especially advised to receive the flu vaccine due to their high risk of infection. However, it is recommended that everyone be vaccinated each year, even if you are completely healthy. Yes, that’s right, every single year! This includes children, six months and older, and pregnant women as well.

Myth 4: You Can Only Pass Along the Flu When You’re Sick

Perhaps the most alarming and unsettling fact is that you can spread the flu even if you look and feel well! In fact, 20–30 percent of those who carry influenza show no symptoms. So, in addition to the vaccine, be sure to wash your hands frequently and disinfect common surfaces at home and work to further protect yourself and others this flu season.

It’s never too late to receive the flu vaccine! Regardless of what you hear, the vaccination can still be beneficial as long as the influenza virus is in season and circulating. Whether you get the vaccine in mid-October or finally bite the bullet in December or later, it is still a proactive step in fighting the flu. According to the CDC, the influenza season usually reaches its peak between December and March, but the CDC reminds everyone that each flu season is different and can vary in intensity, timing and length.

Protect Your Health – Get the Flu Shot Today

If you have already received your annual flu shot, great! If you are putting it off or believe taking your chances is the best bet, think again. Getting the annual flu vaccine will not only protect you and others from the virus, but will also reduce doctor and urgent care visits, missed days from school and work, and money spent on medications. American Family Care wants to help you stay happy and healthy this flu season, so stop by and get your flu shot today!