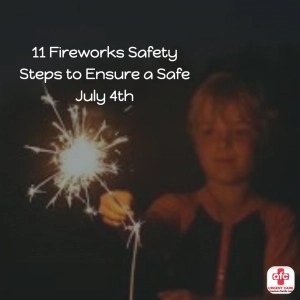 Here’s a sobering statistic: in 2014 alone, there were 11 deaths and about 10,500 hospital trips related to fireworks in the United States, according to the Consumer Protection Safety Commission. Nearly 70 percent of the injuries came during the one-month prime fireworks period between June 20 and July 20.

According to the CPSC,  children between the ages of 10 and 14 were at three times the risk of fireworks injuries than the general population. About a third of the injuries were from small firecrackers, 21 percent from bottle rockets and 20 percent from sparklers. Fireworks safety steps when around fireworks are so important.

An important thing to consider: prior to using fireworks, make sure they are permitted in your state or local area. In the state of Connecticut, all fireworks, other than sparklers and fountains are considered illegal.  Regardless of location, consumers who intend to use fireworks have to comply with federal regulations. Many state and local governments also prohibit or limit consumer fireworks, formerly known as “class C fireworks,” which are common fireworks, and firecrackers sold for consumer use. Consumer fireworks include: shells and mortars, multiple tube devices, Roman candles, rockets, sparklers, firecrackers with no more than 50 milligrams of powder, and novelty items, such as snakes, airplanes, ground spinners, helicopters, fountains, and party poppers. However, if fireworks are legal where you live and you are with home fireworks fanatics who are not able to be held down, be sure to follow these important fireworks safety steps:

11 Fireworks  Safety Steps  to Ensure a Safe Fourth of July

If someone is injured by fireworks, immediately go to a doctor,  or come to AFC Urgent Care West Hartford at 1030 Boulevard, West Hartford, where one of our providers is always available and  is equipped to care for burns and injuries from fireworks. We are open 7 days a week, 8am-8pm Monday-Friday and from 8am-5PM on the weekends.

Have a happy and SAFE Fourth of July!