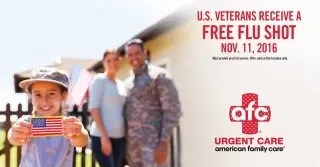 Health Care Leader to Serve Those Who Have Served Our Country

In the wake of AFC’s efforts to promote flu shots and reduce the spread of influenza during the 2015–2016 season, the United States saw a lower percentage of outpatient visits for influenza-like illness, lower hospitalization rates, and a lower percentage of deaths attributed to pneumonia and influenza, compared with the preceding three seasons, according to the Centers for Disease Control and Prevention. Despite the success of AFC’s efforts to mitigate the outbreak of flu, veterans remain at risk.

Influenza outbreaks occur nearly every year, and cost the U.S. economy an estimated $71–167 billion per year in health services use and lost productivity. Influenza-related diseases also cause an estimated 225,000 hospitalizations and 36,000 deaths annually in the U.S., mostly among chronically ill or elderly people. “With more than 160 medical centers in 26 states seeing more than 2 million patients a year, AFC deals with the flu as much or more than any other health care provider outside of the federal government, so we understand the impact it can have on our society,” said Dr. Jeremy Allen, of American Family Care. “With dozens of clinics near military bases across the U.S., we also understand the effect the flu has on veterans and their families. So, we want to do everything we can to serve those who have served our country,” concluded Allen.

SOURCES: The National Center for Veterans Analysis and Statistics, Veterans Emergency Management Evaluation Center (VEMEC), the U.S. Department of Veterans Affairs, and the Centers for Disease Control and Prevention (CDC).

Starting with a single location in 1982, American Family Care has pioneered the concept of non-emergency room urgent care. With its 2013 acquisition of the Doctors Express franchise, AFC has become the nation’s leading provider of urgent care, accessible primary care, and occupational medicine, with more than 160 clinics and 500 in-network physicians caring for 2 million patients a year. Ranked by Inc. Magazine as one of the fastest growing companies in the U.S., AFC’s stated mission is to provide the best health care possible, in a kind and caring environment, while respecting the rights of all patients, in an economical manner, at times and locations convenient to the patient. For more information, visit www.urgentcarewesthartford.com , follow them on Facebook at https://www.facebook.com/afcurgentcarewesthartford/ and on Twitter @AFCWestHartford